The payment industry can be incredibly complex. Every transaction is a multi-step process that involves a number of players – from the merchant and their acquirer to the customer and their issuing bank. Each step has its own unique terminology – such as authorization, verification, and settlement – and can involve one or more actions from one or more players.

Need some extra understanding of the industry’s most commonly-used terms? This glossary can help you get acquainted with the players and processes that are involved with payments. 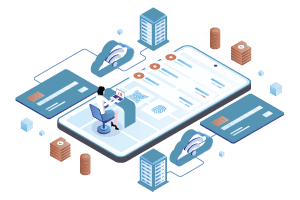 Acquirer (acquiring bank, merchant bank) – A federally chartered bank institution that sponsors merchants for the acceptance of credit card transactions. They provide merchant agreements and receive all settlement transactions from the merchant.

American Express (AMEX) – An organization that issues cards and acquires transactions (unlike Visa and MasterCard, which are bank associations).

Approval – A code issued by a card-issuing bank that allows a sale to be charged against a cardholder’s account. This confirms that the amount is within the cardholder’s remaining credit limit and that the card ahs not been reported lost or stolen. Approvals are requested via an authorization.

Associations – Organizations – namely MasterCard and Visa – that establish and administer the rules and regulations that govern the credit card industry.

Auth only (pre-auth) – A transaction in which a merchant does not intend to charge the cardholder until a later time.

Basis point (BPS) – A percentage change that reflects a merchant’s discount rate, measures as one one-hundredth of a percent (.0001).

Batch – A collection of transactions, typically settled once per day or once per shift.

Batch processing – The act of transmitting a group of related transactions for processing, either manually or automatically.

Capture – The act of creating an electronic transaction, usually for transferring money. Captured transactions are ready for settlement.

Card issuing bank – The financial institution that issues a credit card to a consumer and assumes responsibility for the receivables on the card.

Card-not-present transaction – A transaction that is completed over the mail, by phone, or online, in which the merchant cannot physically inspect the card.

Card-on-file payments – A recurring or subsequent transaction that is processed using a customer’s stored, previously used method of payment.

Card-present transaction – A transaction that is completed in person, in which a merchant can physically inspect the card.

Chargeback – The act of taking back funds that have been paid to a merchant for a disputed or improper credit card transaction. This process is initiated by the issuer after the acquirer has begun the clearing process. Merchants have an opportunity to defend themselves against a chargeback by providing documentation that the transaction was authorized and valid.

Chargeback period – The time frame in which a cardholder may initiate a chargeback. This begins the day after the date the record is first received and ends on the day on which it is dispatched as a chargeback item.

Check guarantee – A service that guarantees payment of a check up to a defined limit, provided that the merchant follows correct procedures in accepting the check.

Clearing – The process of exchanging financial details between an acquirer and an issuer. This facilitates the posting of a cardholder’s account and the reconciliation of a customer’s settlement position.

Close batch – The process by which transactions with authorization codes are sent to the process for payment to the merchant.

Corporate purchasing card – A type of business card that can qualify for lower processing rates.

Credit (crediting entry, return) – A return of funds to a cardholder’s account for a sale that has already been authorized and settled.

Debit card – An ATM bank card used to purchase goods and services or to obtain cash. This does not require a credit limit or a loan; instead, it debits the cardholder’s personal deposit account. A PIN (personal identification number) is required for use.

Decline – A response to a transaction request indicating that the issuing bank will not authorize the transaction.

Deposit – The act of closing a batch and sending the transactions to a host computer for settlement.

Discount rate – The rate a merchant pays their financial institution for the service of processing financial transactions, including interchange and processing fees.

Electronic draft capture – The act of routing a transaction to a host computer for processing and storage. Stored transactions are used to create settlement files and transaction reports.

Floor limit – A preset limit established by a processor that allows merchants to accept credit card sales without authorization. Due to an increase in fraudulent activity, these are now rarely used.

Force (post-authorization) – A sale transaction for which a merchant received voice authorization. This allows a previously authorized transaction to be settled so the merchant can receive their funds.

Gateway – A system that passes data between networks that have similar functions, but different implementations.

Host capture – A type of transaction capture in which transaction information is stored on the processor’s host computer rather than the merchant’s POS system. Settlement occurs at the host computer and may be automatic (performed without merchant initiation).

Host computer – The processor’s computer that is dialed for authorization and settlement.

Independent sales organization (ISO) – A company that is sponsored by an acquiring bank to solicit, sell, and support merchants.

Interchange – The flow of information (e.g., transactions, retrieval requests, and chargebacks) between issuers and acquirers.

Interchange fee – The fee paid by the acquiring bank to the issuing bank for a credit card transaction. Included in the discount rate, this fee is set and collected by the bank card associations.

Magnetic stripe (mag stripe) – A stripe on the back of a bank card that contains magnetically encoded cardholder account information, such as the cardholder’s name, account number, and expiration date.

Manual entry – The process of entering credit card information into a keypad, instead of swiping the card through a card reader.

Member (member institution) – A financial institution that is a member of Visa USA and/or MasterCard International. Members are licensed to issue cards to cardholders and accept merchant drafts.

Merchant – A retailer or other entity (pursuant to a merchant agreement) that agrees to accept credit cards or debit cards as forms of payment.

Merchant agreement – A written agreement between a merchant and an acquirer, outlining both parties’ rights, duties, and warranties with respect to bank card activity.

Merchant category code (SIC code) – A code assigned by an acquirer to a merchant to identify the merchant’s trade, profession, or line of business.

Merchant identification number (MID) – A unique number that identifies a merchant to the merchant bank or processor.

Non-qualified transactions – Transactions that do not satisfy all the card association requirements for the transaction (e.g., those that are entered manually or that are not settled in a timely manner). These transactions interchange at higher rates.

Off-line – An operating mode in which the terminal is not connected to the processor.

On-line – An operating mode in which a terminal is connected to a processor via dial or lease line to provide real-time responses to transaction requests.

Open to buy – The amount of credit available on a cardholder’s account at a given point in time.

Original draft (hard copy) – The actual bank copy of the forms used in a transaction.

PCI compliance – A set of compliance requirements that apply to any merchant that processes, stores, or transmits cardholder data on their systems.

Personal identification number (PIN) – A number used by a cardholder to authenticate card ownership for ATM or debit card transactions.

Point of sale – The place and time that a transaction occurs, OR the device or software used to process transactions.

Post-authorization (post-auth, ticket-only) – The completion of a pre-authorized transaction.

Pre-authorization (pre-auth) – The process of authorizing and reserving funds for a transaction.

Prior authorized sale – A transaction for which authorization was obtained at an earlier time.

Private label card – A payment card that can only be used in a specific merchant’s store.

Recurring transaction – A regularly scheduled charge to a cardholder’s account.

Release – The act of a merchant instructing their terminal to close a batch.

Settlement – The process by which transactions with authorization codes are submitted to the processor for transfer of funds. This process can be automated or manual.

Suspense – A state in which a batch of transactions is not released to interchange because of a problem noticed by the host computer. Human intervention is required to fix the problem and settle the batch.

Swiped card – A card that has been swiped or slid through a card reader (as opposed to a card that has been manually entered). Information that is magnetically encoded in the magnetic stripe is transmitted for processing. Swipe cards are being gradually phased out in favor of EMV (chip and pin) cards.

Terminal identification number (TID) – A unique number that provides a location from which to attribute a payment.

Transaction fee – A per-transaction charge that is added to a merchant’s percentage-based discount fee.

VISA – An association of banks that governs the issuing and acquiring of Visa credit card transactions.

Void – The reversal of a current transaction that has been authorized but not settled.

Questions? We’re here to help you make sense of the complicated payments industry. Contact Curbstone and we’ll help you get the answers you need.

A Trusted Member Of The Payments Industry

Who Needs to be PCI Compliant?